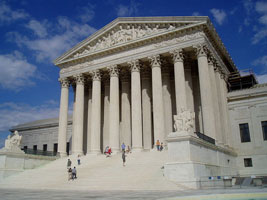 * News Bulletin
We feature an article in the "Tribal Jurisdiction" section regarding the Violence Against Women Act and jurisdictional limits for Alaska tribes.

* U.S. Legislation Bulletin
Two new bills were added:
S.477 - Tribal Gaming Eligibility Act
H.R.1278 - To amend the Trademark Act of 1946 regarding the disparagement of Native American persons or peoples through marks that use the term "redskin", and for other purposes.